Sep 13, 2019 — The first hearing of a state commission to implement a public campaign finance system for New York’s elections was overshadowed by the issue of whether to end fusion voting, which allows candidates to run on multiple ballot lines.

Critics of the proposal say Gov. Andrew Cuomo wants to strike against a left-leaning party that he’s been feuding with, something the governor denies. 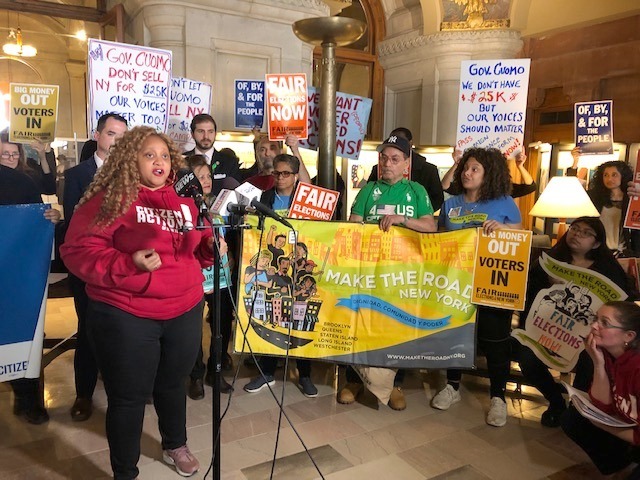 Advocates of public campaign financing who spoke at the commission hearing Tuesday say the state should adopt New York City’s largely successful matching small-donor program, where modest contributions are matched by public funds at a 6-to-1 ratio.

But they also say the commission should not be looking at whether to end fusion voting. Assemblyman Harvey Epstein was one of many state and city lawmakers to testify at the hearing.

“Stay away from fusion voting,” Epstein told commissioners. “This is not the time to mess with a system that works.”

Epstein said he does not believe it was the Legislature’s intention, when it agreed with the governor to set up the commission during state budget talks, to also end fusion voting.

“I don’t believe you have the authority, based on what we did,” Epstein said.

Commissioner Henry Berger, an experienced election law lawyer who was jointly appointed by the governor and the Democratic legislative leaders, argued that the commission does have the power to look at whether to end cross-party endorsements.

“We’ve heard this repeatedly,” Berger said, sounding annoyed. “You and your colleagues adopted a law that created us, and we’re bound by that law. We’re bound by the mandates of that law.”

Berger said the commission is supposed to look at how multiple party endorsements of a single candidate might artificially inflate the amount of public funds that a candidate receives, and he believes that includes considering whether fusion voting can continue.

Blair Horner with the New York Public Interest Research Group said there is a simple way to resolve the problem without changing fusion voting — have the matching donor funds remain with the candidate, regardless of how many party lines they are running on. He said that’s been the rule for decades in New York City.

“That’s a legitimate issue to deal with,” Horner said. “The city of New York has already figured out how to deal with it.”

Some advocates of public campaign financing have called the fusion issue a “poison pill” that could ultimately derail a public matching donor program for the state.

The commission members decided at their first meeting, held in August, that all recommendations they make will be tied together, including potentially an end to minor party cross-endorsements. Commissioners will only be permitted to vote up or down on the total package.

Cuomo, speaking at an unrelated event, downplayed tensions with the Working Families Party.

Cuomo was asked by reporters whether he personally wanted to end fusion voting, and he did not directly answer, saying he supported cross-endorsements in former elections.

“I have benefited from fusion voting in the past,” Cuomo said. “I’ve run on multiple party lines, so I have participated in it.”

Cuomo would not say how he feels about fusion voting going forward, saying he does not want to “influence” the commission.

“I’m not going to tell the commission what to do,” he said.

Cuomo said he’s going to let the commission exercise its own “independent judgment.”